By Ginny Hogan and Ricky Altieri 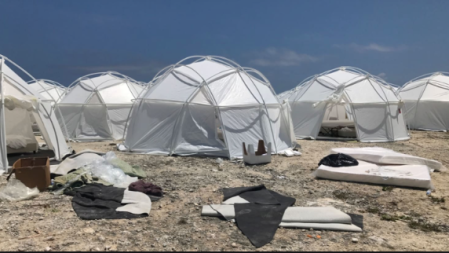 What’s up bros?! It’s me, Billy McFarland, creator of Fyre Festival. Fortunately for you, Trump has given the feds bigger fish to fry, which leaves me free to come back at ya with another killer idea, something so big and splashy it’s never been done before, at least not this week: a documentary about the sick, sick* Fyre Festival.

I know what you’re thinking – there are two documentaries already about Fyre Festival. Who would have guessed it? Definitely not my original investors! Also, not Netflix or Hulu, apparently. Both of those are on ugly-ass streaming services who didn’t want to give me a deal to make a “movie”**, but we have a better idea. We’ll be streaming on the hottest influencer’s Instagram accounts***.

What makes this such a tight investment? Netflix and Hulu made so much money off their docs — I think, I don’t actually know anything about “money”, except that it’s something my dad has a lot of and also something I caused a lot of people to “lose”. But seriously – as my PR person always says: it can’t be a worse investment than the Fyre Festival. So wire me some cash, and also maybe some cheesecake? I can’t get that in jail, booooo.

What makes our documentary about Fyre Festival better than Netflix and Hulu’s? One word: nothing!!

C’mon, documentaries are just boring reality TV shows anyway. So while they blabber away, ours is done in 90 seconds! Plus, the documentary features up-close interviews with just me, Billy McFarland and also with my penis, Billy McFarland’s penis. Yeah – that’s right – you’re getting access to something no woman has ever seen before! Plus, I have a track record of planning things that don’t actually happen, which is perfect for documentaries, because no one wants to watch them anyway!

What are you investor perks? You can decide what story we tell! We can create whatever tight footage you think will make our party look sick. I was drunk off my ass the whole time, so I’m not sure what happened anyway. Can I take a break?

So who else is already involved? We couldn’t get Ja Rule to sign on (schedule conflict, he said he was too busy “living”**** it up). Fortunately, we do have some dynamite celebrity sponsors — specifically, Jenny McCarthy. Remember Jenny!? We’re the only Fyre Festival documentary that promised to come out against vaccines, and so we got her sweet, sweet endorsement!

The rest of our tight Celebrity guest list includes: Beyonce, Sean Parker, Pope Francis, Bernie Madoff, Barack Obama, Tupac Shakur, US intelligence services that found WMDs in Iraq, and Justin Bieber!!!!! Yeah – you heard me correctly. All of those people will be in the documentary, or, at the very least, we’ll wear t-shirts with their names on them! I only wear t-shirts — it used to be because I was fierce and rich, and now it’s because I’m fierce and in jail!!

Where are we screening the sickest documentary***** of all time? In the Cayman Islands — you know? In the Bahamas? Where hot girls go to hang out with me because I’ve paid them to? Sadly, due to legal issues, we’ll only be screening it in the Cayman Islands — the entire rest of the world has denied us a limited release, which is the first time that’s ever happened! Sick!!

Oh–wanna buy tickets to my jail cell? We’re gonna have a Fyre cell party, my cellmate is an arsonist!

*Sick as in ill – due to 17 counts of fraud, my lawyers have recommended I say this! But what are they going to do? Try me for fraud?! Probably!

**Due to circumstances outside of my control, this documentary will be fully scripted.

***Because of the “negative” publicity surrounding the original Fyre Festival, no one old enough to remember wants us to use their accounts, but we’ve struck deals with some of the hottest baby-grammers on the market today, so buckle up, moms!

****His PR person told me to never contact him again.